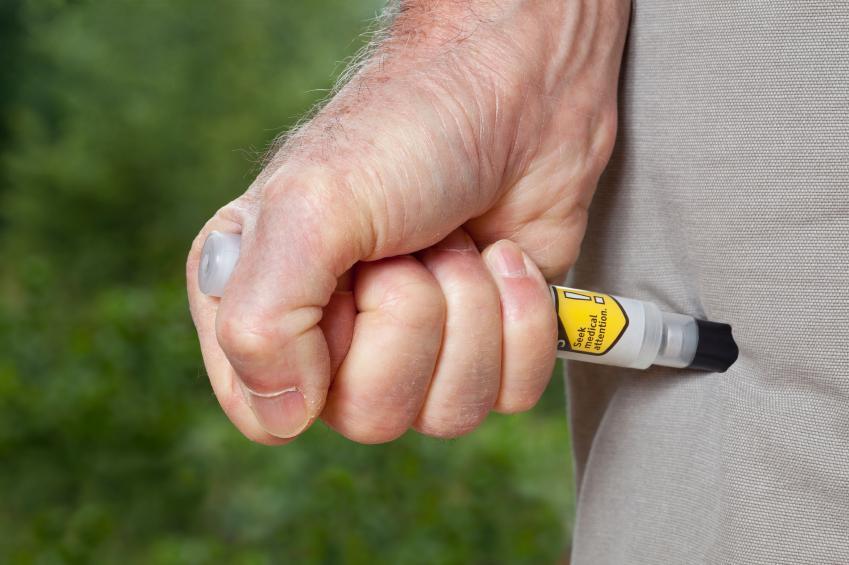 Anaphylaxis is an extremely severe allergic reaction, where the immune system releases histamine, basophils, mast cells, and other substances. The excessive reaction of the immune system to an allergen causes tightening of airways and difficulty breathing. Anaphylaxis can be fatal if not properly treated. Once it is clear that a patient is experiencing anaphylaxis, epinephrine is generally administered. People with extreme allergies often carry EpiPens, which facilitate a simple injection of epinephrine. EpiPens often save lives because there is a limited amount of time from the onset of anaphylaxis and death. For those who cannot get to the emergency room fast enough, an EpiPen makes all the difference.

Symptoms and Diagnosis of Anaphylaxis

While difficulty breathing and swallowing, as well as chest tightness are common and recognizable signs of anaphylaxis, there are several other symptoms that can indicate an anaphylactic reaction. These include: cough, diarrhea, anxiety, skin redness, slurred speech, swelling of the face, wheezing, unconsciousness, nausea, vomiting, hives, nasal congestion, and abdominal pain.

Some drugs can cause symptoms that are similar to those experienced during anaphylaxis. These drugs include aspirin, morphine, and x-ray dye. When people suffer anaphylactic-like symptoms in response to these drugs, they are not enduring an immune reaction like that which occurs in response to an allergen.

There are two main features of anaphylaxis: one is respiratory difficulty, which can occur as a result of asthma or laryngeal swelling, and the other is hypotension, which can present as loss of consciousness, collapse, or fainting. Anaphylaxis occurring without hypotension generally indicates the immediate use of epinephrine intramuscularly. However, epinephrine that occurs with hypotension is better treated with intravenously.

Anaphylaxis is usually diagnosed based on observation of clinical features consistent with the symptoms described above. However, there are also two biomarkers that can be tested for in the laboratory: histamine level and tryptase level. However, these tests cannot be performed rapidly and are not always available. Further, tests for histamine and typtase levels are not specific to anaphylaxis, as these levels can rise due to other conditions as well. Thus, it is most often the case that physicians and patients recognize the onset of anaphylaxis without biological tests.

Treating Anaphylaxis: The Power of Epinephrine

Beta blockers reduce the effects of adrenaline and can therefore make anaphylaxis worse. They can also limit the ability of epinephrine to reverse an anaphylactic reaction. Other limitations in the treatment of anaphylaxis unfortunately derive from improper administration of epinephrine. Often epinephrine is not administered fast to enough to have maximal benefit, which can result from lack of availability of epinephrine (often due to never filling a prescription or not physically carrying an EpiPen) or lack of recognition of anaphylactic symptoms. Patients also frequently report being too scared to self-administer epinephrine with an EpiPen.

Knowing when and how to use the EpiPen for safe and precise delivery of epinephrine is critical during an anaphylactic reaction. There has been significant criticism of health care providers’ care of patients who are at risk for anaphylaxis. Of particular concern is that medical professionals tend not to properly train patients on how to use an EpiPen should they need one. Additionally, medical professionals and patients alike tend not to know the details of the dosing of epinephrine, which is also critical to the successful and safe reversal of anaphylaxis. Propoer training in this respect could significantly enhance the proper use of EpiPens, thereby saving more lives.

Though it can be critical to use epinephrine in response to anaphylaxis, doses that are too small or too large can themselves be life threatening. When epinephrine is administered intramuscularly, as it is with EpiPens, the proper dose for adults is 0.3 to 0.5 mL for a 1:1000 solution. Overdose is particularly risky when epinephrine is given intravenously. Those who are most vulnerable to the adverse overdose effects of epinephrine are the elderly and those with cardiovascular disease or hypertension. Nonetheless, the benefits of using epinephrine in the face of anaphylaxis appear to far outweigh the risks of not using it, even at higher risk patients.

Women suffer anaphylaxis more frequently than do men. People who suffer anaphylaxis from exposure to certain antigens are certainly at risk for future anaphylactic reactions, but the severity of their reactions is not predictive of the severity of future reactions. One reason for this is that the dose of allergen can impact the severity of reaction, and knowing the dose to which one was exposed can be difficult. In the long-term, however, the frequency and severity of anaphylactic episodes has been reported to decrease. Nevertheless, as anaphylaxis is a severe, potentially fatal condition that cannot always be reversed, it is important that patients acquire information on their allergies, understand their risks for developing anaphylaxis, and avoid allergens that could contribute to such a reaction.