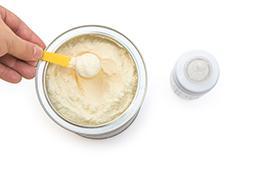 There are a number of reasons why babies may not be able to receive sufficient nutrition from breast milk. To combat the obstacle and ensure that babies are offered proper nutrition easily and early in life, formula was created. Given that breast milk is lacking in certain nutrients, formula provided an opportunity to provide babies with these added nutrients. Indeed, breastfed babies are generally required to take supplements such as vitamin D and iron. In addition, formula creators can formulate the product to address any number of health issues, aiming to provide as many health benefits as possible.

A “hypoallergenic” formula was created by Nestle, which the company claimed provided protection against autoimmune diseases and problematic health issues like asthma. Nestle was granted permission in 2011 by the US Food and Drug Administration (FDA) to market its formula as a product that reduces the risk of developing eczema. However, a new study, published in the British Medical Journal is raising doubts that the formula actually provides the health benefits its creators have been claiming.

Robert Boyle and other authors of the study reviewed information from approximately 19,000 participants in 37 different trials between the years of 1946 and 2015 and concluded that there was little evidence to suggest that formula, or the process that is undertaken to create formula confers any protection against allergy-related conditions or autoimmune disease. To make hypoallergenic formula, cow’s milk is heated to break down proteins in a process called hydrolysis.

Proponents of formula’s health benefits have argued that by breaking up proteins, and thereby making them smaller (into what are known as peptides), the proteins have less power to produce allergic reactions. They claim that with less exposure to allergenic peptides could prevent the sensitization that occurs when allergies develop, thereby reducing the risk of allergies and other autoimmune reactions. As a result of their claims, formula is recommended for infants at increased risk for allergies, asthma, eczema, allergic rhinitis, and even type 1 diabetes.

Immune conditions including allergies and asthma have increased in recent years, particularly among young people, which has increased the incidence of chronic disease. There is much evidence to suggest that dietary exposures during infancy may be associated with the development of some of these conditions. Though it is well established that a proper diet is essential for healthy development and the avoidance of chronic diseases, there is still much to learn in terms of what the ideal diet is for infants and children. The specific nutrients and their optimal doses are still debated by scientists and doctors.

Given the findings of the systematic review and meta analysis conducted by Boyle and his colleagues, some scientists are now urging the FDA to reconsider its recommendations regarding the use of formula and suggest that commercial interests may have interfered with the integrity of the scientific investigation of the health benefits of formula. They also point out that claims made about formula in marketing campaigns could undermine mothers’ motivation to breastfeed, which has been established as the healthiest option for feeding infants.